• Real treatment of culture. The use of realistic characters in realistic settings lends itself to a consistent stream of cultural customs. Cultural questions are included on each test.

• Fresh, humorous stories students enjoy and lots of ideas for students and teachers to create their own stories.

• A serial set of stories that follow characters through two years.

• Thematic units that correspond to most mainstream textbooks.

• Tests and quizzes which go beyond straight English-German matching. These quizzes demand higher-level thinking on Bloom's Taxonomy. Tests include grammar, structure and culture.

• Two versions of every test and quiz to deter cheating.

• Quizzes on half-sized paper to reduce copies and student anxiety.

• Age appropriate from 7th grade through high school. Stories are not edited down for American political correctness.

• A contemporary song written for each unit.

• Blühende Geschichten (embedded reading) for every chapter, starting in Unit 2.

• Available as iBook downloads (Teacher's Book, Student Workbook and Reader) and Kindle (Reader) for about half price.

• Lots of suggested activities including new ideas for Orals.

Michael Miller was born and raised in California. He received his Bachelor’s Degree in German and Spanish at California State University, Fullerton. He taught Spanish at Lexington Jr. High School in Cypress, California for over four years. He moved to Colorado in 1993 where he has taught German and Spanish at Cheyenne Mountain Jr. High School in Colorado Springs. He has taught TPRS® since 1996 and authored the Sabine und Michael German TPRS® curriculum in 1999. He received his Master’s Degree in Curriculum and Instruction from the University of Colorado at Colorado Springs in 2001. Michael authored the Charo y Lee Spanish TPRS® curriculum in 2009. In 2013 Michael led his school to be named a German Center of Excellence by the AATG. Michael has served as the A/V chairman for NTPRS for many years and is sought after for workshops and training. 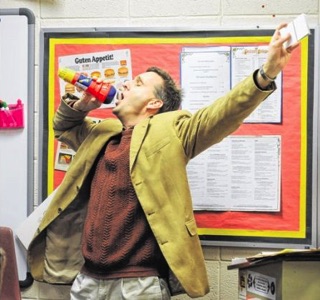 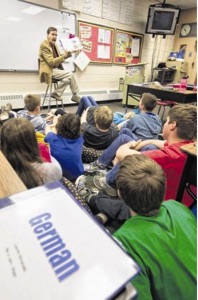